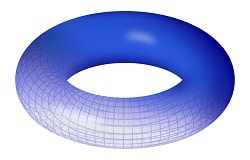 93 How to be more than infinite

Three articles, beginning with article 50, describe life as an ascending progression from one order to another. A person grows at each step. Birth and death look like end points, but in the whole story they are points on an infinite line. In mathematics a line extends infinitely in both directions and any lesser portion is a ray (one fixed end point) or a line segment (two fixed end points). Mortality is a segment.

Several word games are possible. Can one thing be more infinite than another? That sounds oxymoronic—the words don’t fit together. On the other hand, can there be a higher order than being infinite? Today’s article shows how that is possible. By analogy to mathematics, it supports the statement in article 52 that humans have no terminal state. Godhood is not final.

First, we examine the infinite line on which we are now. Consider how a line is like the real number system. A real number can be attached (like a label) to any point on the line. There are an infinite number of points between any two points on the line. Compare the fact that by extending to unlimited decimal places, one can list an infinite set of numbers between any two given numbers. That applies whether the endpoints are zero and one or astronomically large positive or negative numbers. There is always a one-to-one match of points on a line or line segment with the real number system. That is first order infinity.

Although our imagination limits our concept of the sequence, we have discussed a linear progression. One individual identity exists before birth, progresses into human mortal experience, and resumes progression in a different state after death. Humans are in a finite segment. Godhood is to realize the entire infinite line; therefore, God is called all-knowing.

Article 62 makes the infinite extent of human life logical by filling in details missing from some popular belief systems. Unending sentience (self-awareness) is not unfathomable mystery. There is Platonic reasoning to support life beyond our current physical observations. Life is a line, infinite in both directions. However, being infinite does not end the discussion.

To appreciate an order higher than an infinite line, consider two intersecting lines. Together they define a plane. Within that plane, either line can rotate and sweep the entire plane while both lines still have the point of intersection in common. In other words, for every point on a line, there exist an infinite number of lines in a plane. Because of the infinite-to-one correspondence, the plane represents a higher order of infinity. It exists in two dimensions.

If one rotates (spins) the plane around one of its lines, it sweeps through a volume. For every line in the plane, there exist an infinite number of planes that include that line. That is again an infinite-to-one correspondence, and a volume represents a higher order of infinity. It incorporates three dimensions.

This describes first, second, and third order infinities. We now use them as analogy for human progression. This is not cosmological proof. It is storytelling to expand our thinking, an exercise people regularly do. This corresponds to using mathematical reasoning in making logical comparison to physical phenomena.

When God says my thoughts are higher than your thoughts, we should take that as a clue that we fall short of understanding the depth of God's thoughts. How can we become upset over these small differentiations we make among our God theories when all of them combined don't touch the higher properties that attach to godhood? Our finite mortal mind should never pretend that one human representation is significantly superior to another. All of us can expand from where we are to something larger. Compared to this something larger, our differences shrink to insignificance.

Theology is commonly treated as a study of one god. People might be called atheists for rejecting specific descriptions of that one god. I prefer to think more broadly. I, too, reject the idea of one supreme being on a throne surrounded by passive subjects. However, I obviously do not reject a status that includes being infinite. I use the word nontheist to stay clear of endorsing or discarding one specific portrayal while retaining a spiritual depth of a different kind. Ernstraudian philosophy is about eternal progression, not theological dogma.

So, what makes an infinite god forever able to make progress? The key lies in orders of infinity. A being that encompasses infinity along the line on which humans exist is well occupied with approaching a higher order of infinity. As humans do not remain in the mortal state throughout their eternal existence, so gods do not remain in the first order of infinity forever. We must not feel that we humans are so important that we occupy the absolute complete attention of an infinite being. While we follow one who leads us, that god is also busy learning, inventing, or occupying a higher order. Yes, we have shown mathematically that there are higher orders of infinity. We and that god are privileged to grow eternally.

Not as it seems

In passing I note that a curved line is not described in a single dimension. The circumference of a circle might appear as an infinite line to a particle confined to the points of the circumference, but outside observation proves that the circle lies in a plane. A line we draw with a compass is not the mathematical line discussed in the previous section. A larger perspective leads to more accurate understanding.

Humans sadly regard a toroid as an infinite tunnel. They see themselves in an infinite conduit that has only one dimension extending from behind to ahead. It looks like a straight line with no end points. Eventually a longer view backward or forward would reveal the curvature. Getting out of the tunnel would show that the circle exists in two dimensions.

Silly humans, we get it wrong when we are too deep in what we are doing. We are so completely occupied with the linear perspective straight ahead that we limit ourselves to that one dimension. We will be enlightened as eventual godhood exposes the higher orders. Becoming aware of them will enable us to spread out from the line and occupy the plane. Advancing to a higher order will be a qualitative, not just a quantitative, expansion.

Being For Others Blog copyright © 2020 Kent Busse